Cyber bullying is like playground bullying, but it's done either online or with cell phones. It can take the form of individual harassment, public humiliation, or both. The viral nature of online life and proliferation of cell phones makes sending humiliating or degrading messages, pictures, or videos simple, immediate and anonymous. Screen names easily disguise bullies' identities. Sometimes they can even pretend to be the victim, posting comments that look like the victim wrote them. Other times, the cyber bullying can take the form of direct threats -- either physical ones or social ones.

Cyber bullying affects many adolescents and teens on a daily basis.

Cyber bullying can take many forms:

· Pretending to be someone else online to hurt another person

· Sexting, or circulating sexually suggestive pictures or messages about a person

Cyber bullying can be very damaging to adolescents and teens. It can lead to anxiety, depression, and even suicide. Also, once things are circulated on the Internet, they may never disappear, resurfacing at later times to renew the pain of cyber bullying.

Despite the potential damage of cyber bullying, it is alarmingly common among adolescents and teens. According to Cyber bullying statistics from the i-SAFE foundation:

· Over half of adolescents and teens have been bullied online, and about the same number have engaged in cyber bullying.

· More than 1 in 3 young people have experienced cyber threats online.

· Over 25 percent of adolescents and teens have been bullied repeatedly through their cell phones or the Internet.

· Well over half of young people do not tell their parents when cyber bullying occurs.

· Around half of teens have been the victims of cyber bullying

· 1 in 10 adolescents or teens have had embarrassing or damaging pictures taken of themselves without their permission, often using cell phone cameras

The Cyber Bullying Research Center also did a series of surveys that found these cyber bullying statistics:

· Over 80 percent of teens use a cell phone regularly, making it the most popular form of technology and a common medium for cyber bullying

· About half of young people have experienced some form of cyber bullying, and 10 to 20 percent experience it regularly

· Mean, hurtful comments and spreading rumors are the most common type of cyber bullying 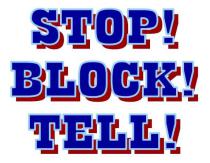 Parents and teens can do some things that help reduce the cyber bullying statistics:

· Talks to teens about cyber bullying, explaining that it is wrong and can have serious consequences. Make a rule that teens may not send mean or damaging messages, even if someone else started it, or suggestive pictures or messages or they will lose their cell phone and computer privileges for a time.

· Encourage teens to tell an adult if cyber bullying is occurring. Tell them if they are the victims they will not be punished, and reassure them that being bullied is not their fault.

· Teens should keep cyber bullying messages as proof that the cyber bullying is occurring. The teens' parents may want to talk to the parents of the cyber bully, to the bully's Internet or cell phone provider, and/or to the police about the messages, especially if they are threatening or sexual in nature.

· Try blocking the person sending the messages. It may be necessary to get a new phone number or email address and to be more cautious about giving out the new number or address.

· Teens should never tell their password to anyone except a parent, and should not write it down in a place where it could be found by others.

· Teens should not share anything through text or instant messaging on their cell phone or the Internet that they would not want to be made public - remind teens that the person they are talking to in messages or online may not be who they think they are, and that things posted electronically may not be secure.

· Encourage teens never to share personal information online or to meet someone they only know online.

· Keep the computer in a shared space like the family room, and do not allow teens to have Internet access in their own rooms.

· Encourage teens to have times when they turn off the technology, such as at family meals or after a certain time at night.

· Parents may want to wait until high school to allow their teens to have their own email and cell phone accounts, and even then parents should still have access to the accounts.

Richard Webster, Harford County Examiner, "From cyber bullying to sexting: What on your kids' cell?" [online]